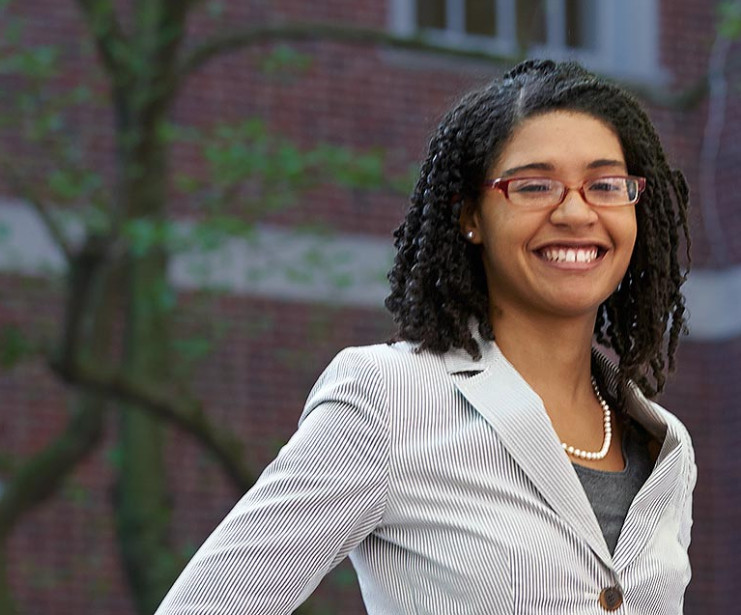 Sara VanderHaagen, HFAB Communications Chair: How would you describe your vocation, and how are you pursuing that in your current position?

Gabrielle Apollon: When God told me to go to law school, I strongly sensed that He told me to be a “voice for the voiceless.” While I’m not entirely sure what that will look like in the long run, I think that’s the overarching calling that God has invited me into. In my current position as an immigration attorney at a youth center in New York City, I primarily represent teenagers who are survivors of abuse, abandonment or neglect in family court and immigration proceedings. I assist them in applying for permanent residence. Since entering the field of immigration, I’ve discovered that there’s often one type of person that people think of when you say “immigrant.” Both within the field and in the general public, people often primarily think of Spanish speakers. I’ve found myself advocating within my organization and elsewhere for people to recognize how many black and Francophone immigrants there are, and how much need there is within West African and Haitian communities for quality information and representation. As a Haitian-Canadian, I’ve always felt called to use the education and skills I have to serve the Haitian community, in one capacity or another. In terms of next steps, I’m currently thinking and brainstorming about how to best serve Haitian immigrants, as new diasporas form throughout South America and they face increasing challenges here in the United States.

SV: How has being a Harvey Fellow affected your vocation and life?

GA: Because of the Harvey Fellowship, I was able to pursue the type of work that I felt called to – work that paid very little. Instead of having to go to a corporate law firm my first summer to help cover my living expenses for the upcoming year, I was able to work with a small NGO and document human rights conditions of Haitian migrants who had recently migrated to Brazil after the 2010 earthquake in Haiti. That work led me to testify at the Inter-American Commission on Human Rights about the human rights violations many Haitians experienced during their journey, and it sparked my interest in migration.  The Harvey Fellowship also freed me to not have as much debt upon graduation. As a public interest attorney married to another public interest attorney, and who supports my extended family, that’s a big deal for us. And lastly, I’ve been deeply encouraged by the other Harvey Fellows I met through the Institute; going to the Institute this year gave me much-needed space to evaluate and pray about where I am in my career and where God might be calling me next.

SV: What about your work most excites or inspires you right now?

GA: To be honest, it’s a challenging time to be an immigration attorney. I often feel disheartened, rather than excited. However, my clients are the most inspiring people I know. And they’re the reason my work feels manageable. It feels like a tremendous privilege to walk alongside teenagers who have faced some of the most horrific things but constantly persevere. I have a client who came here from West Africa at 15 years old, having lost his mother and having been disowned by his father, and spent two years riding the subway; he’s now a freshman at a college where he obtained a full-ride scholarship. Getting to be a part of his journey, and others like him, is life-giving.

SV: What about God’s work most excites or inspires you right now?

GA: The glimpses I get of my clients’ faith inspire me. As pathways to legal immigration are becoming more restrictive, I increasingly have to give my clients bad news. However, many of them do not respond in the ways I’d expect. When they respond by reminding me that God is in control of their lives, not the current government or the current president, I am convicted and reminded of where I should be placing my hope and trust. It also challenges me to pray more – to pray that our churches will step up and increasingly speak up for the foreigners among us, to pray that my clients would find other believers who are willing to serve and love them sacrificially, and to pray that my heart would be as soft and full of faith as theirs.